No klepat znovu na ty mé R3 nebudu, to už jsem dělal, klouby omlácené a ... nic.
Jinak podrobnosti o řešení ozvučnice viz. níže.
EF Engineers developed a technique, originally for the LS50 loudspeaker system but applied to all R Series 2018 systems, that combines the two approaches and is more eective than both. The technique, called damped bracing, consists of strategically placed wooden braces that, instead of being rigidly coupled to the panels are joined via a lossy interface. The braces are placed where the panel movement would otherwise be greatest and the lossy layer, like normal damping pads, converts the energy into heat. Additional damped braces are situated at the back of each driver, which reduce the level of reactionary vibration transmitted from the driver to the cabinet. The reduction in sound output from the cabinet varies model by model, depending on the exact geometry, but is typically of the order of 20dB, as shown in figure 3. Cabinet sound radiation is highly distorted and, at the resonance frequencies, causes time-smearing as the output hangs on. The increase in clarity wrought by the damped bracing is readily noticeable, is probably best in class for single-enclosure multi-way loudspeaker systems and is comparable to the best high-end systems. 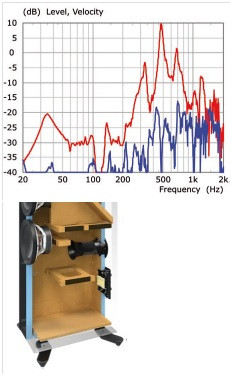